Presenting the complete results of the World Druidry Survey of 2018-2020... 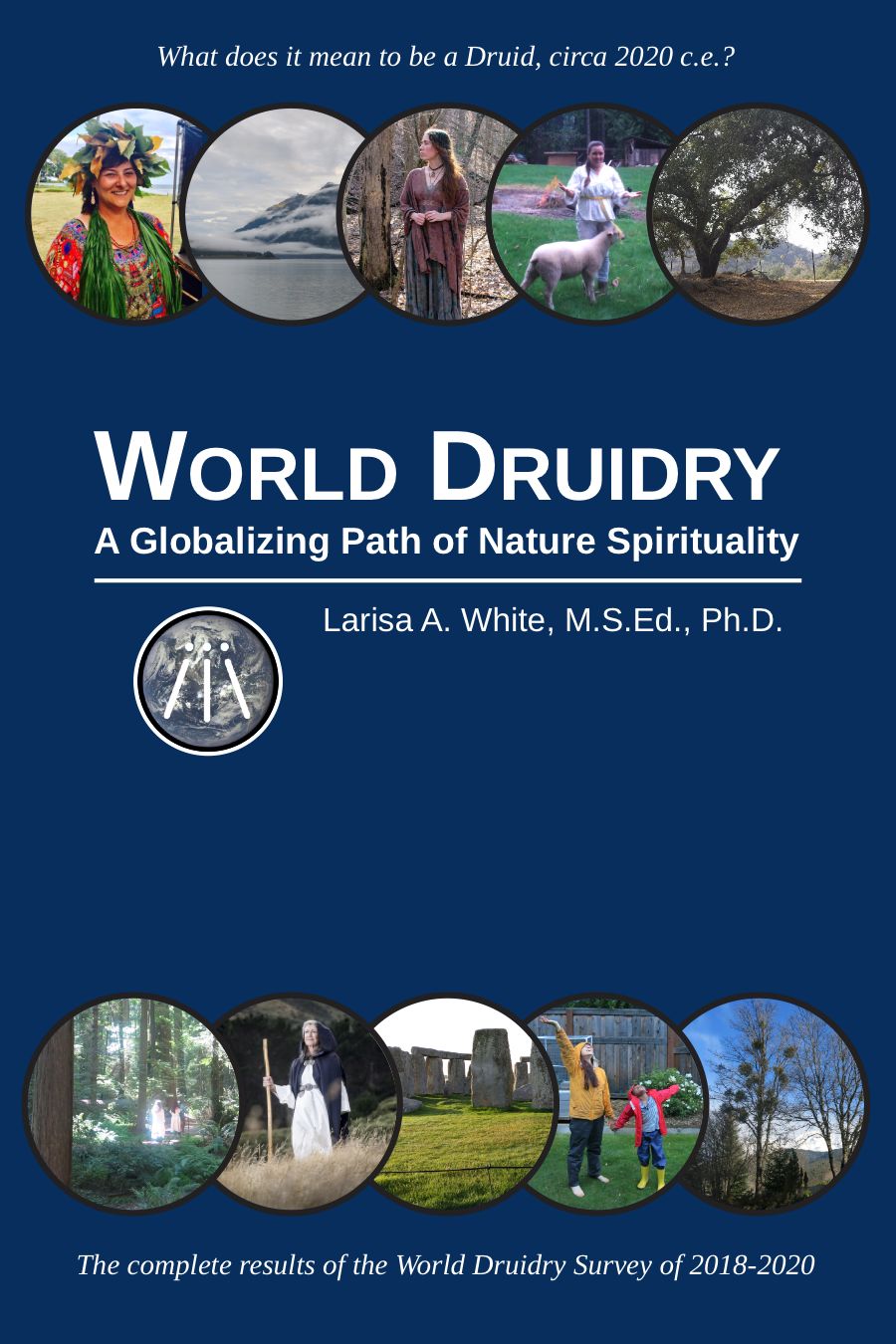 Now available for purchase via Amazon, Barnes & Noble, and an assortment of other booksellers, worldwide.

"With this book, the written history of Druidry has now entered a fourth stage. The first stage were the writings of antiquity. The second, the personal writings of the Druid pioneers of the late 20th / early 21st Century such as Carr-Gomm, Shallcrass and Restall-Orr. The third, the academic histories of the Druids as revealed by the likes of Hutton et al. Now we have a book which, for me, is probably the most important Druid book in the last 10 years.

The start of the fourth age of Druid literature, as I confidently predict this book will come to represent, discloses how Druidry is actually practiced by its 21st Century adherents. Using questions formulated in conjunction with many leading Druid figures, Larisa A White delves into the "what, how and why" of the Druidry practised by modern day Druids from around the World.

Using statistical analysis, the results can be surprising but for me, it is the disclosure of the common practice amongst the, often, solitary practitioners from very often completely different backgrounds, that point to how the shape within the modern world of Druid practice currently lies.

Easy to read and full of the personal, and in some cases, necessarily anonymous responses from Druids around the world, this is a book about the lived experiences of Druids today. It shows and explains both concisely and statistically the commonalities between distant practitioners, geographically close groupings and the wider Druid organisations.

For someone who is active in interfaith such as myself, this book will be a great toolkit with which to refer to when, in discussions, the inevitable "what Druidry actually is, and how it is practiced" questions arise from time to time within the national UK interfaith setting.

a Druid from East Dorset, UK

"Before describing the book, I must explain that the modern philosophy and faith of being Druid attracts controversy as it has several differing origins.

The European historical (Iron Age) druids were described by numerous classical authors as being an elite social class of religious officiants, healers and judiciary living alongside and complementing the warrior class. A considerable body of writing mentioning the druids and their lives also exists in the Irish mythologies. The faith of the druids just about survived the Romans and seems to have succumbed to Christian pervasiveness in the Early Medieval era.

Archaeologists have found many remains and artefacts of ‘Celtic’ or Romano-Celtic origin that have faith, healing and judicial implications, but nothing clearly labelled “Druid”.

In the Age of the Enlightenment, when literacy and education became widespread, and the influence of the Roman Catholic Church reduced, a London-based Welshman began a revival of Welsh culture and needed an indigenous faith to promulgate it. He found the druids in antiquity and rebirthed them using visual elements from Ancient Roman, Greek and Egyptian artworks. The backstory and philosophy were constructed from surviving early Welsh writings and ideas from Hinduism (which, unknown to Mr Williams, shares a common ancestor with the indigenous European faith).

There was a separate revival of interest in occult ritual and spiritualism in the 19th century. Figures such as Éliphas Lévi, Israel Regardie, Helena Blavatsky and Aleister Crowley entered this forum and marked the landscape indelibly.

In the 20th century, as a cultural rejection of the imperialism and jingoism that had led to two world wars and subsequent technological and economic aggression, the New Age movement was birthed. Cladding itself in Eastern philosophies and a new reverence for the ecology of the planet, the adherents looked for order in the new chaos of thought. Some found the druids.

With the stage set, we can now view this opus, which is a significant work of research.

Dr Larisa A. White is a teacher and researcher with a background in “mixed-methods sociological research, curriculum design, educational program evaluation and teaching”. She poses the question, “What does it mean to be a Druid, circa 2020?”

To answer this, a battery of questions, The World Druidry Survey of 2018-2020, was devised and spread via the internet to individuals, most of the larger Druid schools and many of the tiny ones. Given the diverse thought sources, the results show a surprising cohesion of principle and an amazing diversity of thought and practice.

The 322-page work begins with acknowledgements, historical background, an overview of the World Druidry Survey and lists of many of the most influential published writings on this subject. These alone are of great use to a scholar.

What makes this a joy to read though, are the writings chosen from the personal testimonies of the hundreds of practising druids from around the world that supplemented their answers. Some are quite stark, others have a lyrical quality, but all are deeply felt, sincere and refreshingly without any hint of the evangelism that pervades other religious writings.

Towards the end of the study, Larisa brings the threads together for a “Druidry’s Spiritual Common Core”, an unbiased overview of that first question, “What does it mean to be a Druid, circa 2020?”

The larger ‘mystery schools’, orders and movements, analogous to denominations in other faiths, are surprisingly similar in practice and outlook. The individual practice of unaligned druid adherents can be extremely tangential. In a worldwide context, Druidry shares the building of relationship with the natural world and an almost sacred responsibility to continue to study, learn and develop as an individual, and as a component of both society and the bionetwork. The larger schools vary in their emphasis on esoteric exercises and rituals – for some these are core, for others, ceremony is almost non-existent. Some movements employ a ‘shamanistic’ approach with animism as key concept, others a polytheistic outlook with formulae for addressing each god and goddess.

Druidry is a faith of the land and the land has an effect on residents’ perspective. Europeans often have ancient places available that may or may not have connection to the historical druids. Some movements encourage the seeking out of these. In the Americas and Oceania, ancient places are rightfully claimed by indigenous populations and that is respected. A working relationship is sought and, if denied, that is respected. Unsullied natural places are reverently used instead to commune with the deities and spirits of the place without cultural appropriation.

The Order of Bards, Ovates and Druids order, based in the UK but a worldwide movement, considers Druidry to be a philosophy rather than a faith with Christian, Wiccans and Buddhists among their number. The smaller Druid Network charity (UK again) takes a converse view, although many adherents have other faith values as a spiritual baseline and the Network forms a meeting place for Druids of all orders and variations. Druids have a mistrust of unchanging “dogma”, preferring their way to grow and evolve according to their experience for a rich spiritual lifestyle with a distinctly practical edge.

As an original source for academic researchers and the merely curious, it is my opinion that this will stand alongside and complementary to, Ronald Hutton’s “Blood and Mistletoe” and Graham Harvey’s “Handbook of Contemporary Animism”, for an accurate overview of what modern Druidry is all about and means to the individual seeker."

Professor of History, University of Bristol
Author of "Blood and Mistletoe: The History of the Druids in Britain"

"If anybody wants to know what modern Druidry is like, across the world at the present day, then this is the book which provides the answer. It is researched to rigorous standards of academic scholarship, while also allowing Druids to speak in their own many voices, unmediated. No other work brings out so clearly what they have in common, and what distinguishes them between groups and nations. It is an excellent achievement."

"World Druidry offers a fascinating and unrivalled survey of contemporary Druidry internationally. It is enlightening about attitudes and activities, clarifies dynamic frictions between individuality and community, and traces generational changes. Among many virtues, its inclusion of the many voices of diverse Druids will make this an invaluable resource for researchers and practitioners alike."

"This is a fantastic resource showing the diversity of views and practices among Druids today. Larisa White’s World Druidry survey has found Druids engaging with their environments in Europe, the US, Australia, South America and in many other locations with some surprising commonalities as well as differences. This volume is invaluable for anyone interested in finding out more about contemporary Druids."